The play tells the story of Christopher John Francis Boone, who is fifteen years old.  He stands besides Mrs Shears’ dead dog, Wellington, who has been speared with a garden fork, it is seven minutes after midnight and Christopher is under suspicion. He records each fact in a book he is writing to solve the mystery of who killed Wellington.  He has an extraordinary brain, and is exceptional at maths while ill-equipped to interpret everyday life.  He has never ventured alone beyond the end of his road, he detests being touched and distrusts strangers. But his detective work, forbidden by his father, takes him on a frightening journey that upturns his world.

Alice King-Farlow, Director of Learning at the National Theatre said, “The National Theatre is committed to increasing opportunities for students to see live theatre. Simon Stephens' brilliant play The Curious Incident of the Dog in the Night-Time is a fantastic first experience of theatre and we know from last year’s tour that seeing a live professional production in your own school hall can have real impact. We’re delighted that another 13,000 students will experience the production in their school this year, and we’re working closely with our Theatre Nation Partners to engage with new audiences and to build relationships between schools and their local theatre.” 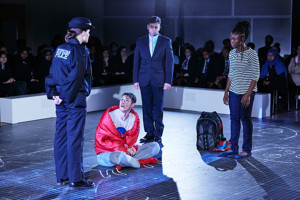 Photo credit: The Other Richard