Welcome to the Geography Department

The aim of the Geography Department at Copthall is to help our students to become inquisitive and critical thinkers of the world around them. We hope to inspire them to become productive citizens of the world in which they are aware of the impact humans have on the environment at local, national and global scales. Therefore, our curriculum incorporates a wide range of case-studies from all seven continents, learnt in great detail from KS3-KS5 to develop an awareness of their roles and responsibilities as global citizens.

We recognise the importance of showing students the diversity of physical and human world in which they can compare the differences and similarities to different cultures, countries and people. We place an emphasis on being aware of the wider world around you and we encourage students to share their own experiences such as, culture, language and  migration. We understand that in this ever changing world it is important to develop values of respect, understanding and empathy which is what encompasses our curriculum. We focus heavily on building their vocabulary and build on their skills using a range of both IT and traditional resources.

We are also committed to showing students the use of Geography in the real world by helping them develop a broad range of geographical and transferrable skills, useful across subjects and highly valued by employers (these include ICT, numeracy, literacy skills).

The Curriculum Leader may be contacted via email enquiries@copthall.barnet.sch.uk

We believe it is important to provide our students with chances to implement Geographical understanding into real world context. In recent years we have provided students from Years 7-13 fieldwork opportunities both locally in London and further away.

We also make students aware of fun Geography games and documentaries they can watch to learn more about a topic in Geography and improve their knowledge.

There are many pathways students can choose from studying Geography as it is “one of the most employable degrees”, The Guardian

Geography works well with various other subjects such as Science, History, Politics and Economics to name a few.

We have had students attend university to study and pursue a career in Geography. Students have in recent years have been able to hear from various speakers about career opportunities such as marine science and town planning to name a few.

This is the first of Philip Pullman's Dark Materials Trilogy. and although originally aimed at children this trilogy is equally popular with adults.
Northern Lights opens in an Oxford that is both very similar and yet oh so different from our own. We are introduced to Lyra Belacqua and her daemon, Pantalaemon, a shaft shifting animal that is an external manifestation of her soul. Lyra and Pantalaemon's adventures introduce us to the wider world outside Oxford, and the wonderous people creatures that inhabit it. Gradually an ongoing battle, perhaps between good and evil, is unveiled.

Horrible Geography of the World

Geography with the gritty bits left in! Inside you'll find out what happens when a volcano turns nasty whether you'd survive at the frozen poles how a frog can help you get a drink in the desert.  Hold on tight as you embark on a whistle-stop trip around the globe taking in everything from the perishing poles to desperate deserts, stormy weather to earth-shattering earthquakes. Crammed full of far-out facts, it's the ultimate Horrible Geography guide to the planet. Geography has never been so horrible.

What's Where on Earth Atlas: The World as You've Never Seen It Before!

Earth is brought to life like never before through stunning, specially commissioned 3D maps and artworks. Uncover incredible geographical features, wildlife, cities and landmarks, and the world's population in unprecedented detail.
Scale the majestic peaks of the Himalayas, trek through the thick, creature filled jungles of South America, or roam the expansive grasslands of Africa in these pages!
This amazing educational book is so much more than just a knowledge book filled with cool maps and facts about the world. This vital source of learning is perfect for children to dip into for school projects and is a fantastic addition to any family library.

Congo is a dangerous place, even for people who are trying to do good.When Sophie has to visit her mother at her sanctuary for bonobos, she's not thrilled to be there. Then Otto, an infant bonobo, comes into her life, and for the first time she feels responsible for another creature.But peace does not last long for Sophie and Otto. When an armed revolution breaks out in the country, the sanctuary is attacked, and the two of them must escape unprepared into the jungle. Caught in the crosshairs of a lethal conflict, they must struggle to keep safe, to eat, and to live. In ENDANGERED, Eliot Schrefer plunges us into a heart-stopping exploration of the things we do to survive, the sacrifices we make to help others, and the tangled geography that ties us all, human and animal, together.

An in-depth look at natural disasters, the causes and effects on people and landscapes.

This essential text addresses the growing need for a dedicated coursebook for students and teachers of world development. As the source of the most respected international magazine on world development issues, the publishers have created a highly credible and accessible text to illuminate this increasingly important subject.

Thematic chapters cover globalization, population, the millennium development goals, and eleven other vital topics. It distils them down to their essentials, outlining contending viewpoints and offering background material and case studies, along with high-quality colour photographs, charts, and graphs.

In Factfulness, Professor of International Health and a man who can make data sing, Hans Rosling, together with his two longtime collaborators Anna and Ola, offers a radical new explanation of why this happens and reveals the 10 instincts that distort our perspective.

It turns out that the world, for all its imperfections, is in a much better state than we might think. But when we worry about everything all the time instead of embracing a worldview based on facts, we can lose our ability to focus on the things that threaten us most.

Inspiring and revelatory, filled with lively anecdotes and moving stories, Factfulness is an urgent and essential book that will change the way you see the world.

In the universally acclaimed and award-winning The Bottom Billion, Paul Collier reveals that 50 failed states - home to the poorest one billion people on earth - pose the central challenge of the developing world in the 21st century. The book shines much-needed light on this group of small nations, largely unnoticed by the industrialized West, that are dropping further and further behind the majority of the world's people, often falling into an absolute decline in living standards.

What the bottom billion need, Collier argues, is a bold new plan supported by the Group of Eight industrialized nations. If failed states are ever to be helped, the G8 will have to adopt preferential trade policies, new laws against corruption, new international charters, and even conduct carefully calibrated military interventions. Collier has spent a lifetime working to end global poverty. In The Bottom Billion, he offers real hope for solving one of the great humanitarian crises facing the world today. 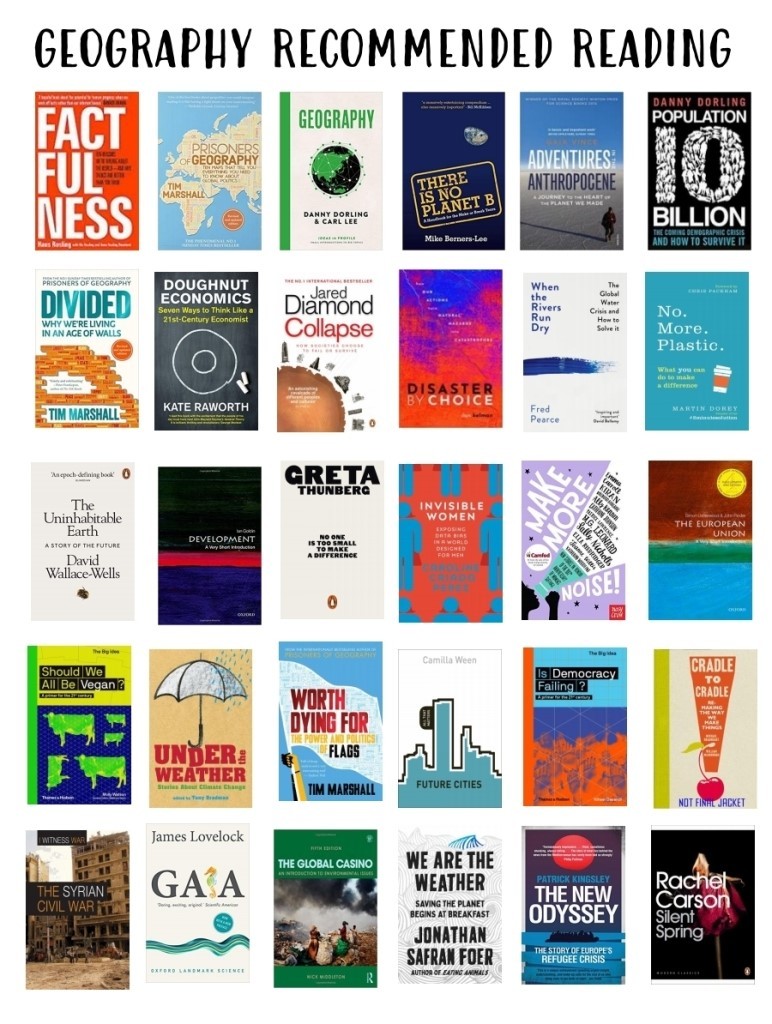 Geography is taught across three classrooms, each with an interactive whiteboard.  Pupils have access to a range to textbooks and differentiated resources, as well as fieldwork equipment.